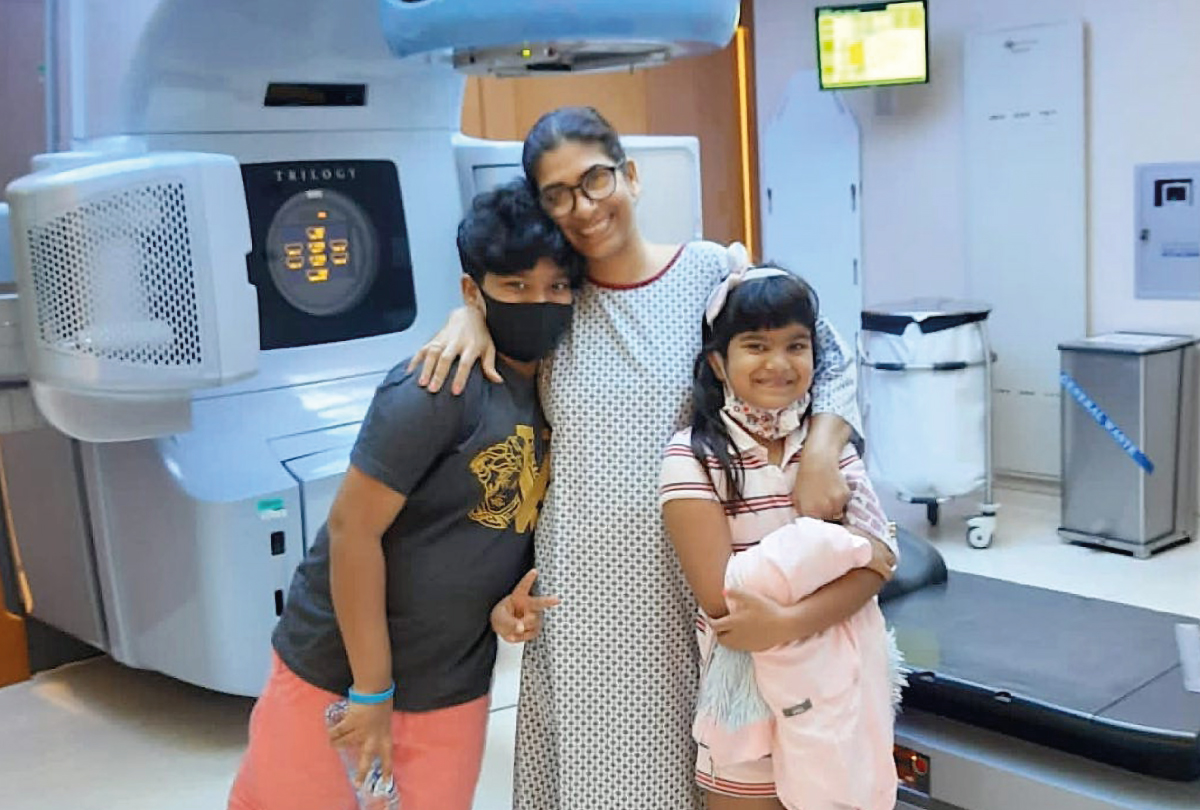 When Dubai resident Shayani Madushika felt a slight itch and pain in her left breast last July, she quickly feared the worst.

Initially brushing it off as nothing untoward, the mother-of-two decided to consult a doctor, mainly for reassurance, as the pain persisted and a lump had formed.

Ms Madushika, 44, had only recently moved from Sri Lanka to Dubai with her two children to join her husband but her life was turned upside-down only days after that initial appointment, when she received a diagnosis that the small lump was a cancerous tumour.

“Life was normal in Dubai,” she said. “The kids continued their schooling online and we were happy to be together again as a family. But on July 28, I felt a slight itch on my left breast above the nipple area. I then felt it was a little hard, like a lump. I felt numb [with worry].”

After several tests, doctors confirmed the presence of a tumour and informed Ms Madushika that it needed to be removed.

“The radiologist’s test results came back and showed a suspicious lump,” she said. “[I was advised to get] a biopsy to confirm what exactly it was. Everything was happening so fast and additional test results confirmed that the lump was cancerous. I felt like I was given a death sentence.”

Having only recently moved to Dubai, she had no medical insurance and limited funds to hand.

Sri Lanka was in the midst of its worst economic crisis in decades and although the couple had put in a request to withdraw their savings from their bank back home, it was rejected.

Fearing this would delay her recommended treatment, she began to feel helpless.

“Doctors confirmed I did not need to undergo chemotherapy but said I needed to start a three-week bout of radiation,” she said. “When I inquired about the costs of treatment, it was extremely expensive.” Her doctor recommended she get in touch with the Al Jalila Foundation in Dubai, which could help with the costs of the treatment.

After attending the foundation’s Majlis Al Amal, a cancer drop-in centre dedicated to supporting female patients, she met many women who were in a similar situation.

“The foundation is absolutely amazing,” she said. “In a matter of a few days, my request was approved and I was set to have my radiation treatment in the best hospitals in UAE. I felt blessed.”

Not only did the foundation cover the cost of the treatment, she said the emotional support she received through the Majlis helped her to maintain a positive attitude throughout.

“I am ever so grateful to the Al Jalila Foundation for funding the total cost of my radiation treatment. I was blessed to have been in UAE for the treatment. The doctors, nurses and all medical staff have been nothing but wonderful. I have never received or seen that kind of kindness and patience.”

In December, Ms Madushika underwent her last radiation session and doctors confirmed that the cancer had not spread.

Speaking to The National, Dr Abdulkareem Al Olama, chief executive of Al Jalila Foundation, said breast cancer was the most common form of the disease affecting women in the UAE.

“[It makes up] 38 per cent of all female cancers. A breast cancer patient knows first-hand just how valuable having the right treatment to fight the disease is. Al Jalila Foundation consider it a privilege not only to be in a position to provide financial medical assistance to patients like Shayani, but also to offer emotional support through our Majlis Al Amal community.”

Ms Madushika has since returned to Sri Lanka so her children can attend in-person classes but said being in Dubai at the time of her diagnosis saved her life.

Note: Shayani’s story was  published by The National on 23 August 2022.